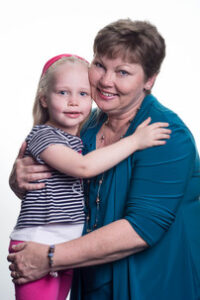 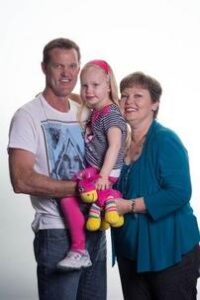 It started off as any other normal day for us in Perth on Wednesday June 6th 2012.

My husband Graeme was at work and my eldest daughter had gone to school, I dropped Holly off at daycare, which was right next door to me at work. She gave me a big kiss and a hug then ran off to play as she would do normally.

Graeme picked Holly up that day in the afternoon. She was normally enthusiastic and full of energy in the car, but that day she sat quietly, not saying much and not eating any snacks given to her.

Once she got home, she laid down on the couch, then 15 minutes later started to cry which was followed by vomiting.

When I got home and saw Holly she was flopped over the pillow on the couch and her little body was just like a rag doll. She had a slight temperature and I checked her for a rash, thinking it might be chicken pox, but there was nothing.

We monitored her overnight and by early morning her symptoms had worsened and she was looking blankly at me. Then her eyes just rolled back and she just started screaming and it was in that instance we rushed her to hospital.

The doctors started treating her for gastro. But her condition deteriorated. She got very pale suddenly, and while I was watching her I realised her chest was moving in and out very rapidly. The doctor came back and said that he would organize some blood tests and called the paediatrician who was on the ward to come and check Holly out. He ordered X-rays and the doctor asked how long had it been since Holly last moved her head. It had been hours.

Another doctor was brought in to observe Holly. She asked if she could put her hands underneath Holly’s head to move her head around. We agreed and she moved around to the top of the bed, slid her hands gently under Holly’s head and then tried to turn her head and Holly let out a gut-wrenching scream. This scream was like nothing I had ever heard in my life – it was the most heart stopping scream I had ever heard.

The Paediatrician told us they had to perform a lumbar puncture. She was diagnosed with Pneumococcal Meningitis.

She had swelling and inflammation on the brain so they said they would continue to give her 4 high doses of steroids per day to help.

For five days we just watched her lifeless, unresponsive body lying in bed, hooked up to all sorts of machines and drips, praying for our precious little girl to get better.

On day eight I was just bursting with happiness as Holly was wide awake, eating, giggling and we could see the sparks shining in her beautiful blue eyes.

After two weeks in hospital, the doctors came back saying the test results were good and Holly could go home.

Holly has had her check-ups and she has been cleared of any side effects such as hearing loss or brain damage. She is our Miracle Girl!!!