Our boy Deano, forever in our hearts

The weekend was as busy and chaotic as every other.

We have three children – Josie who is 5, Boyd who is 4 and Dean who is 18 months old – so life was wonderfully crazy. We held a dinner party on the Saturday night with close friends, we all have kids about the same age and we were tackling parenthood together.

It was after dinner that my youngest son, Dean, showed signs of being unwell. He was crying and fussy – I picked him up and thought he felt hot. I took his temperature and it was 39.4! It was an unusually high temperature, so I gave him Panadol and my husband decided to put him to bed.

I thought we would definitely be up throughout the night to him given his high temperature, but he actually slept through.

The Sunday was very normal for us. Dean was his usual happy chirpy self, and had been looking and feeling better from the previous day except for a slight runny nose. My husband took the kids to the park in the morning while I got some jobs done. That afternoon we went for a drive to a nearby farm to feed the cows and look at the goats. The kids loved it and my husband and I looked at each other like always and thought ‘how perfect is this life!’

That night Dean was climbing all over the couches and drinking his milk before bed. I decided to put Dean to bed, and he drifted off to sleep effortlessly in the way that Deano always did. 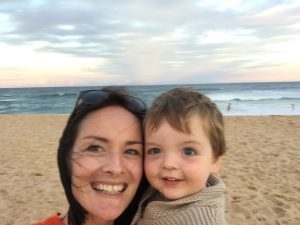 My husband was up with our two older kids at about 6am, as usual. The first sign that all was not normal was that Alex had to go in and wake Dean up at about 7.10am. When he went in to see Dean he noticed that Dean was completely wet right through his sleep sack from sweat and urine.

Alex got him up and hopped in the shower with him. He noticed that Dean was slumped over when he was standing in the shower. Dean also didn’t fight Alex when he went to put a nappy on him – which he would usually do because he hated getting dressed.

Dean was lethargic and didn’t have any energy. It had all the hallmarks of the flu to Alex. Alex took the older two to school and took Dean to his mother’s house who was going to look after him for the day while Alex worked.

When he got there he gave Dean a bottle of milk, which he drank. When Alex’s Mother, Bronwyn, went to lay Dean down he vomited all over the place. She cleaned him up and lay him on the couch –Bronwyn knew that Dean wasn’t feeling very well and needed to rest.

Dean happily lay on the couch and slept – a good sign for a sick baby. Sleep is good.

Dean slept on and off all morning. Alex came back over to check on him at regular intervals, but all seemed well. He was lethargic, so best to let him sleep.
At about lunch time Bronwyn decided that it was about time he got up to have some water. She woke Dean up and he drank a bottle of water. He was still very unwell so Bronwyn let him lay on the couch and he drifted back to sleep.

At about 2pm Alex’s Dad, Ian, got home from work. Bronwyn decided it was time to get Dean up. She went over to the couch to wake Dean up and let him know that his Grandpa was home but Dean wouldn’t stir. Bronwyn called his name but still nothing. She picked him up and his body had gone floppy.

She called Alex immediately. Alex took Dean. Dean’s body was limp and he was completely unresponsive.

Dean began to have what Alex thought was a seizure. His arms curled inward, he began to froth at the mouth. Alex was desperately trying to open his mouth to clear his airway but his jaw was clenched shut.

The ambulance Inspector arrived and opened Dean’s eyes. He immediately knew the problem was neurological because Dean’s pupils were different sizes. After making this diagnosis the Inspector radioed his communications centre for an immediate helicopter retrieval to Sydney for expert help. Things were grim.

Alex called me however I was in a meeting. I called back as soon as I finished my meeting and was met by a frantic story that ‘Dean was unwell. He was still breathing, the ambulance was there! It wasn’t looking good.’

I was working in Sydney that day, 1 1/2 hour’s drive from home. I rushed to the Children’s Hospital because that’s where Dean was being airlifted to.

When Dean arrived he was still unconscious and totally unresponsive.

Doctors went in. Doctors came out. Doctors went back in again. Nurses went in. Nurses came out. Alex and I sat and watched. Deano wasn’t moving. We took him down for a brain scan with the doctors. We weren’t allowed in the room. We waited outside. They came out with him 20 minutes later and said the scan was inconclusive.

At about 8pm I walked in on a conversation Alex was having with the Head of the ICU. He had asked what was going on, the truth and no soft version.

The Head of the ICU said ‘OK, I will tell you. I suspect that this is a severe case of Pneumococcal Meningitis. This is a very dangerous disease. Your son Dean is very, very unwell. The outcome of this disease can be fatal, or more commonly can be catastrophic brain damage.’

The next 24 hours became a roller coaster of emotions. Dean still lay in bed,  breathing with the support of a machine.

However, when we returned  the next morning at 5am,  things had changed.The nurse said Dean had moved  his foot. Alex and I were ecstatic. After about 15 minutes of riding the high of this great news, the nurse started to talk. She said Dean’s stats were good, but her concern was that Dean had received no sedation or pain relief since yesterday when the ambulance officers had given it to him. The concern now was that Dean wasn’t showing any signs of distress and given he had a lot of tubes in his throat, he should have been showing some signs of agitation like increased heart rate, irritability, or any form of movement.

At 2pm Dean had an Electroencephalogram (EEG scan) which is a medical test to measure the electrical activity of the brain. We were in this hospital room to get the results and lots of medical people started to come into the room.

The Head of Neurology told us that it was with deep regret that unfortunately there was no activity in Dean’s brain. He classified it as “brain dead”.
It was at this very point that Alex and my world completely shattered. Our Dean wasn’t going to come back from this.

The next 24 hours were a blur. It’s hard to know what happened, other than we had to prepare to turn Dean’s life support off and say goodbye. Truly the lowest point any parent could possibly go to.

Dean was a healthy and happy little boy. Nothing could have prepared us for the shock and devastation that has followed since Dean’s passing.

We would like to thank Meningitis Centre Australia whose website informed us of this disease in the early hours and days following this terrible tragedy.

Alex and I now try and help others learn more about Pneumococcal Meningitis and educate where possible.