The little angel who keeps flapping his wings 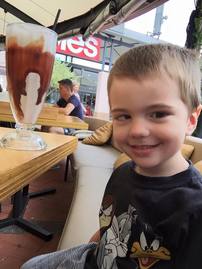 Tristan was born via c-section in Queensland in 2013 and had trouble breathing due to fluid on his lungs. He also had a very high temperature. He was whisked away to the Special Care Unit and put on oxygen in an incubator. They took some bloods, and they came back with Streptococcus Meningitis and he was put on IV antibiotics.

We spent a week in hospital; the antibiotics did their job.

His next episode of Meningitis happened after his 6-week immunisations. Two days after his immunisations, we were back and forth to the GP with high temperatures and wasn’t keen on feeding. The GP put it down to the immunisations and told us to give him some Panadol.

On the third day he was extra sleepy, wouldn’t eat, and still had crazy high temps and Panadol wasn’t working. He disliked being handled.

Tristan was a grey colour. I picked him up and he screamed the highest pitched scream I had ever heard. It was a scream that will haunt my dreams for the rest of my life.

His hands and feet were icy cold, yet the rest of him was burning hot. His eyes were squinting in the light and he was arching his back. I knew that he was seriously ill.

I took him to the emergency department and they acted quickly and efficiently. I told them his symptoms and he was hooked up to IV antibiotics straight away. Next came blood tests, chest X-Ray and a horrific lumbar puncture.

The results came back quickly and it was bacterial Meningitis.

He was given 3 types of antibiotics and was isolated under high observation.

That afternoon he stopped breathing and he went blue. Alarms went off and a rush of people came into his room. They put an oxygen mask on him and made the call for him to be transferred to the children’s hospital with an intensive care unit.

There wasn’t enough room for me in the ambulance due to the incubator and extra paramedics. It was unknown whether Tristan would even make this short trip, for which I was told to prepare for the worst. I waited in the parents’ room while they did everything they could to save him.

The room was empty, dark and cold and I was all-alone, begging god to save my baby. My husband, a FIFO worker was desperately trying to work out how to get to us, from 1000’s of miles away.

4 days later, he came off life support and was put on high flow oxygen and we were transferred to the high dependency ward. The Antibiotics were doing their job again, and had saved his life.

The next 3 occurrences of Meningitis happened when he was 5 months, 13 months and 23 months old. All three had different symptoms. The first was projectile vomiting – over and over again. The doctors at the emergency department were sure it was just a gastro bug, but to be on the safe side decided to do a lumbar puncture. The results came back with Viral Meningitis.

The second was a febrile seizure, a purple pinprick rash and a high fever. The emergency department did another lumbar puncture. The bug didn’t grow into a known Meningitis but they classed as a viral Meningitis.

The third case was a rash on his tummy, but this time looked more like a heat rash, swollen glands, diarrhea and high temps. Once again my little guy had to go through another lumbar puncture, another unknown case of viral Meningitis.

So here we are today, Meningitis free for 1 year but with a recent immune deficiency diagnosis, it begins to make some sense.

Tristan’s story is out of the ordinary. Meningitis unfortunately isn’t as rare as it used to be, but recurrent Meningitis is.

You don’t need an immune deficiency to get Meningitis. Anyone can get it, just like a cold or the flu.

But this isn’t just all about Tristan.

It’s about every single child, here and everywhere. I count my blessings everyday that although Tristan has been to hell and back he has survived. Too many children haven’t.

The two most important things I have learned from my experiences with Tristan is:

1. Trust your instincts and;